The time has long since passed when bad design is an acceptable part of daily life. As a society we know how to design all kinds of things to a high standard, and we have a right to expect our government to set examples of good design, not only because they are in a position of leadership but because they have taken on the responsibility for our collective health and safety where good design can be the difference between life and death. 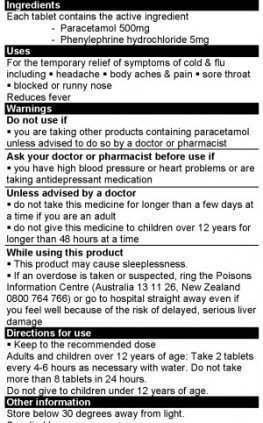 In Australia, where responsibility for government regulation of medicine information is in the hands of the Therapeutic Goods Administration (TGA) we are about to see bad design required by regulation, overturning a decade of progress.

Contrast the above highly usable design with the totally untested design which TGA has proposed in 2014 (right).

Based on the evidence of our public (published) and commercial (unpublished) test results—both of which are available to TGA—we would expect that fewer than 50% of literate users will be able to use the TGA 2014 design on the right at an acceptable level.

According to the Federal Drug Administration ((FDA) in the USA:

Product naming, labeling, and packaging should be designed for the end user—the provider in the clinical environment and/or the consumer.”

So here is a question for our politicians:

How many more unnecessary hospital admissions, injuries, and deaths are you prepared to allow before you prevent the TGA introducing bad design?