How many public servants does it take to change a standard letter?

It takes 100 public servants and costs $500,000 to change a standard letter on a government computer used by Centrelink—the main Australian Federal Government agency responsible for making Australia’s welfare payments, according to reports earlier this year,

According to these reports:

“The system was developed for Australia in the late 1980s, based on a Model 204 database management system first used commercially in 1972.”

I’ve worked with similar systems in both the public and private sectors during that period and subsequently. Indeed, many of those systems, like the Centrelink one, are still in use in both government and business.

Here is my take on the issue. Most importantly, this is not an IT or database age problem. True, there have been massive improvements in speed, software languages, security and interface design since the 1970s, but the power of these systems has been largely squandered because administrations still deal with texts in the same old way. Large organisations are still producing their thousands of bills, statements, and letters using outmoded administrative practices and procedures in development, execution and long-term maintenance. The belief that the fundamental problem is one of technology, actively encouraged by technology vendors, has led to successive generations of disappointing outcomes.

Thirty years ago, CRI began to research these systems to discover why they routinely failed to meet the needs of people trying to read and make sense of the documents they produced.

We noticed some common patterns across organisations:

Our approach to dealing with this mess was to look at the systems from a communication point of view. We analysed them as conversations between organisations, citizens, and consumers. As in other areas of our research such as forms, legal documents, and medicine instructions, we developed a suite of document grammars: first, a set of rules for writing, composing, designing, and usability testing; and second, a complete set of specifications for implementing, monitoring, and adapting the system in the future.

One of the earliest systems we designed and implemented was for a large insurance and investment company. The programming was in COBAL and the output went to a line printer whose only claim to sophistication was a single proportionally spaced font—Helvetica. Below is a page of the thirty-page set of specifications CRI produced, showing the algorithms we devised for the document assembly part of the system. 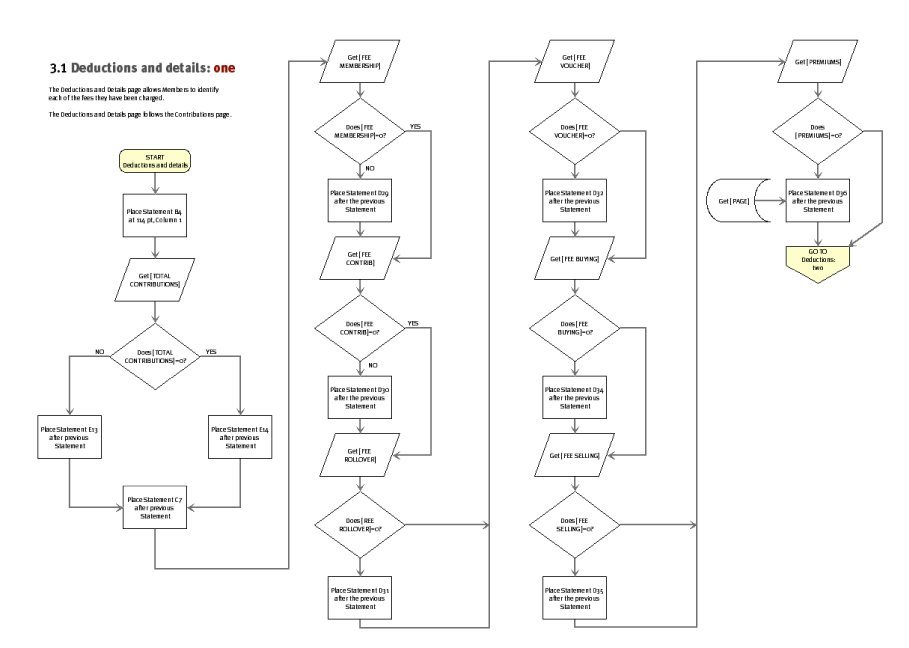 As with all the systems we have designed, this company made a massive ROI: fewer business analysts working fewer hours on the upkeep of the system, improved customer relations, faster turnarounds in transactions, fewer and shorter call centre calls, and increased sales.

As for IT, it never was nor will be the issue. Only one thing needs updating: the way government and businesses think. We suggest in this case that the Auditor General should give this matter a good hard look.